Sat 1st & Sun 2nd May/ 1pm-5pm/ £1 + donations – SPIKE ISLAND OPEN DAY, BRISTOL Nanoplex presents a fundraising event for HKKP – The Children’s Film and Zoetrope Workshop. An afternoon of screenings, workshops and raffles. HKKP (Haiti Kids Kino Project) is a cultural exchange organised by The Cube Cinema’s childrens’ wing, Nanoplex.  We are a mobile cinema projecting films to children in Haiti affected by the earthquakes while also providing workshops for Haitian and Bristol children to make their own films, which are swapped.  This is a fundraising event to help keep our extraordinary project alive. Come along and meet the people behind the HKKP, see the Haitian children’s films, and make some fun stuff that will travel all the way to Haiti.
* A magical Zoetrope workshop for children to make their very own cartoon to watch on the big screen!!
* A chance to make a digital postcard to show children in Haiti
* A screening of the beautiful animations Hedgehog in the Fog and Michel Ocelot’s Kirikou and the Sorceress – both favorites in Haiti with our mobile cinema
* Raffle
* LadyLucy T Shirts
Haitian children affected by the earthquakes are experiencing untold damage and despair. Further anxiety grows through inaction, loneliness and boredom. HKKP contributes to quality of life through creating, sharing, forging friendships, connections and delighting in film.www.cubecinema.com/haiti 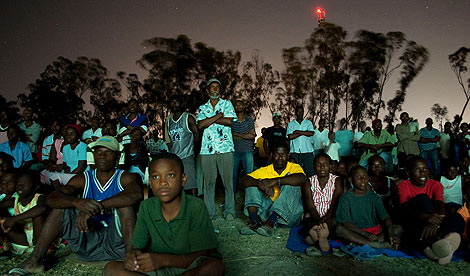 HKKP is featured in the Guardian on Monday, 22nd March 2010.
The article can be read online here.